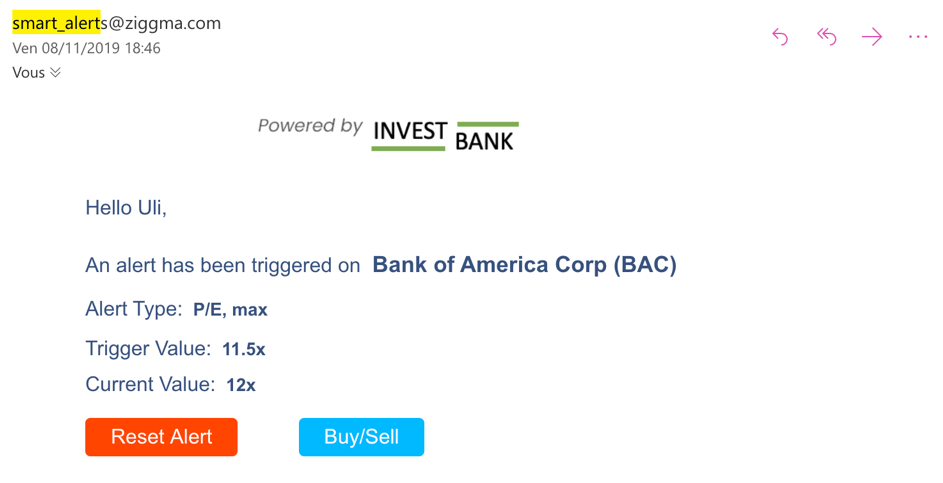 As with a good or service, we investors buy a stock when we think we are getting a good deal – following a shrewd analysis of the company behind it. The findings of our analysis make us confident that the stock’s price will increase in value over time so that the position will generate a gain.

This can occur for two reasons.

First, the company in question achieves excellent growth rates which mechanically increases the stock’s price at a constant valuation.

But here’s the issue: How do we track when this valuation, i.e. at which we find the stock expensive, is reached? Who really has the time to give his portfolio positions a reality check on a daily basis?

This is where Ziggma comes in. Ziggma’s Investment Portfolio Tracking enables you to set smart alerts on key company valuation measures, such as the PE ratio.

Thanks to our intuitive ruler bar configuration Ziggma users can set smart alerts in a matter of seconds.

You recently bought Cisco Systems at a historically low PE ratio of 18x after coming to the conclusion that such a valuation is not justified over the long term in light of the 5G roll-out and the company’s overall quality. You are a long term investor and happy to wait for your investment thesis to play out.

During your analysis you will have also determined the valuation level at which you would no longer want to own Cisco shares. Let’s say this level is 22x earnings (PE ratio = 22x).

In order for you not to have monitor Cisco’s valuation level on a daily basis or even more frequently, you can simply set a PE smart alert at Ziggma. This is how easy it is:

10 months later the market’s sentiment towards Cisco has changed. It endows it with a higher multiple that eventually reaches a level of 22x. Assuming you have set a smart alert, Ziggma will immediately send you a smart alert by email once this level is triggered.

Thanks to the Ziggma Smart Alert you have effectively monitored Cisco’s valuation over time without any investment of your precious time.

Our Smart Alerts play a key role in our ambition to make investing easy.

Ziggma is the first comprehensive portfolio and risk management solution for the private investor. Link your portfolio now and let us help you manage your portfolio thanks to our innovative monitoring and optimization features. Across all major asset classes.